The Employment Situation Report, otherwise know as Non-Farm Payrolls or simply NFP, is released by the Bureau of Labor Statistics once each month, usually on the first Friday. It generally measures the health of the economy in the United States.
This report is important because the US is the largest economy in the world and its currency (USD) is the global reserve currency. The many economies peg (tie) their currency's value to the reserve currency, many commodities such as gold and oil are priced in terms of the reserve currency and the local economy's debt is priced in terms of its own currency.

The Non-Farm Payroll report, because of its importance to the reserve currency, tends to move all markets: currencies, equities, treasuries, interest rates, and commodities. It does so immediately after the release of the economic data and sometimes dramatically.

It would be impossible for the government to survey every citizen and every employer each month. Therefore, the NFP surveys are based on a small sample sizes and then statistical engineering produces a headline number for the entire employment market nationally.

The headline number for NFP tends to move all financial markets. Traders, investors, bankers, financial managers and economists use this information to formulate opinions, identify opportunities and develop strategies to mitigate risk in the market, not just in the US, but globally. Its important that these market participants are prepared for various scenarios and thus develop economic models to predict the likely headline number.

The following are likely included in many economic modeling techniques.

1. Average NFP Number
Create averages based on the headline numbers. For example, what is the 3, 6 12 and 24 simple averages for the headline number? This would give you a benchmark to base the actual result on. An above average headline release may indicate an increased velocity in the current uptrend or perhaps a potential change in trend in a down trend.

2. Average in weekly Jobless Claims
Create averages based on the weekly headline numbers. Typically 4, 12 and 24 week simple averages are enough. This can be important to measure not only changes in trend, but perhaps changes in the velocity of the trend.

3. ISM Industry Data
The Institute for Supply Chain Management releases reports each month that measures an industry that reflects the health of the local economy as well as global macroeconomics. The ISM reports cover the Manufacturing and Non-Manufacturing sectors in the US. Pay close attention to the employment sub-component of each. You will see the current trend for sector jobs and the velocity of the trend in each report.

4. ADP Employment Report
ADP is a payroll processing company. They typically provide paycheck, tax and benefits processing services to small and medium sized businesses. The ADP number is release the first Wednesday of the month. They simply report how many new employees were added to their system by their clients. It does not use a sampling methodology.

5. The Challenger Report
This report is created by an executive recruiting firm. It measures mass layoffs when corporation let go many employees at one time. Use this number to discount after you estimate your headline number. For example, if your model suggests 300K jobs at NFP, but the average Challenger Report is 50K job cuts, then reduce your estimation to 250K.

Over the years I have developed two strategies to identify short term trading opportunities for the release of the Non-Farm Payrolls headline number.

This strategy is setup before the news is released. The goal is to overlap the average daily range with solid levels of support or resistance. For example, let's say the EUR/USD move 110 pips per day. About 30 mins before NFP, measure 110 pips above the current market price and 110 pips below the current market price. Mark each on your chart. Then look for key weekly or monthly reversal pivot points (R2 or S2) and round psychological numbers (like 1.0800000). Ideally there will be an overlap of two or more levels of support and resistance.

If price hits one of these levels, look for a reversion back inside the range. The logic is that if the market has moved too far too face and will normalize now that the emotion created by the initial release has dissipated.

This strategy is setup after the news is released. Its based on a continuation pattern. The goal of this strategy is to trade in the direction of the initial reaction to the news by the market.

If the headline release of NFP creates green candles on the 1 minute chart, you will be looking to buy the currency pair on a retracement. After a few minutes you will start see some red candles. Measure the distance from the the Pre NFP price to the to peak using a fibonacci study. Your aim is to buy in a zone between the 38.2% and 61.8% retracements.

Your trade should be near breakeven within 5 mins. If you are not profitable by then, you may consider exiting your trade early, regardless of the number of pips. However, your stop loss will be placed below the 100% line, which is generally less than 25 pips away. Your target would be the support/resistance entry point identified in the pre release trade setup.

The exact opposite tactics would be true of a down move.

Some traders use an options style trading strategy which I don't think makes sense in a spot currency market like forex. This strategy places market orders above and below price just before the release of the new. It is generally done with a One-Cancels-Other (OCO) so that if one order is triggered, then your position is entered into the market and the other order is canceled. The goal of this strategy is to get into the trade immediately after the news and in the direction of the initial move of the market.

I see several potential problems with this strategy.

Whipsaws: This happens when the market jumps for a few second in one direction and then immediately reverses and continues the other opposite direction. This can happen for a variety of reasons, such as misreporting the headline number by the media, traders guessing before the release, but also the market learning of a large revision from the previous month and it often takes a few second longer to get that number since the headline number is released first.

Wide Spreads: Most forex brokers now use Non-Dealing Desk and ECN business models. They are not market makers. This means you recieve the retail market price for your trades. During high volatility situations like the release of NFP, the market is either very thin or has a glut of orders that needs to be processed. In either case, the BID/ASK spread can widen, sometimes as dramatically as 25 pips. Its not your broker's fault... that is the market price at that moment. If you had placed your stop 20 pips away, you would have been stopped out of an otherwise potentially profitable trade.

Slippage: The Non-Farm Payrolls report can create moving market with large trading volumes. Slippage can occur with such market conditions. Slippage is the delay of placing your order and then having it get filled in the market. Typically, this process takes just a second. However, after NFP, it may take 5 or 10 seconds and price may have moved as many pips during that period of time. Slippage isn't your broker's fault either... you are simply trading during unfavorable (risky) market conditions.

As mentioned, a few seconds after the release of the headline NFP number, a revision for the previous month is also released. Since the methodology for the Establishment Survey and Household Surveys are based on sampling and statistically modeling, the guess work by the government can prove extremely inaccurate. It is common it see 30% revisions. Therefore, especially on months when the headline number is as expected, pay close attention the revised number. The market often trades that new information instead.

Information on these pages contains forward-looking statements that involve risks and uncertainties. Markets and instruments profiled on this page are for informational purposes only and should not in any way come across as a recommendation to buy or sell in these assets. You should do your own thorough research before making any investment decisions. FXStreet does not in any way guarantee that this information is free from mistakes, errors, or material misstatements. It also does not guarantee that this information is of a timely nature. Investing in Open Markets involves a great deal of risk, including the loss of all or a portion of your investment, as well as emotional distress. All risks, losses and costs associated with investing, including total loss of principal, are your responsibility. The views and opinions expressed in this article are those of the authors and do not necessarily reflect the official policy or position of FXStreet nor its advertisers.

EUR/USD has dropped below 1.10 as the market mood improves. Earlier, it hit three-week highs as the stock market crash and rush into bonds is raising the chances of the US Fed cutting rates. Further coronavirus headlines are awaited.

GBP/USD is trading below 1.29, close to the 2020 lows as concerns about a no-trade-deal Brexit are weighing on the pound. Coronavirus-linked USD weakness is minimal in this pair. 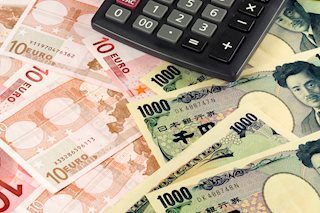 The buying interest around the safe-haven yen remains unabated, knocking-off the USD/JPY pair to the weakest levels in three weeks below the 109 level. The spot faces a double whammy amid growing coronavirus fears and March Fed rate cut bets.

EUR/USD has dropped below 1.10 as the market mood improves. Earlier, it hit three-week highs as the stock market crash and rush into bonds is raising the chances of the US Fed cutting rates. Further coronavirus headlines are awaited.

GBP/USD is trading below 1.29, close to the 2020 lows as concerns about a no-trade-deal Brexit are weighing on the pound. Coronavirus-linked USD weakness is minimal in this pair.

The buying interest around the safe-haven yen remains unabated, knocking-off the USD/JPY pair to the weakest levels in three weeks below the 109 level. The spot faces a double whammy amid growing coronavirus fears and March Fed rate cut bets.

Crypto summer will be back in the next spring

The attention of the financial world is right now on the equity segment. The force with which prices are moving down is extraordinary, with terrifying technical details such as a close below 3000 points on the S&P 500… 100 points down!

Gold: Comeback on the cards as path of least resistance is up

The spread of coronavirus has weighed heavily on stock markets and sent investors to safe havens. However, after a few days of gains, the yen has returned to dominate safe-haven flows and the precious metal is falling.

Discover how to make money in forex is easy if you know how the bankers trade!

In the fast moving world of currency markets, it is extremely important for new traders to know the list of important forex news...

Chart patterns are one of the most effective trading tools for a trader. They are pure price-action, and form on the basis of underlying buying and...

The forex industry is recently seeing more and more scams. Here are 7 ways to avoid losing your money in such scams: Forex scams are becoming frequent. Michael Greenberg reports on luxurious expenses, including a submarine bought from the money taken from forex traders. Here’s another report of a forex fraud. So, how can we avoid falling in such forex scams?

Trading is exciting. Trading is hard. Trading is extremely hard. Some say that it takes more than 10,000 hours to master. Others believe that trading is the way to quick riches. They might be both wrong. What is important to know that no matter how experienced you are, mistakes will be part of the trading process.